The 7 most important announcements from Microsoft Ignite It’s Microsoft Ignite this week, the company’s premier event for IT professionals and decision-makers. But it’s not just about new tools for role-based access. Ignite is also very much a forward-looking conference that keeps the changing role of IT in mind. And while there isn’t a lot of consumer news at the event, the company does tend to make a few announcements for developers, as well.

This year’s Ignite was especially news-heavy. Ahead of the event, the company provided journalists and analysts with an 87-page document that lists all of the news items. If I counted correctly, there were about 175 separate announcements. Here are the top seven you really need to know about.

Azure Arc: you can now use Azure to manage resources anywhere, including on AWS and Google Cloud

What was announced: Microsoft was among the first of the big cloud vendors to bet big on hybrid deployments. With Arc, the company is taking this a step further. It will let enterprises use Azure to manage their resources across clouds — including those of competitors like AWS and Google Cloud. It’ll work for Windows and Linux Servers, as well as Kubernetes clusters, and also allows users to take some limited Azure data services with them to these platforms.

Why it matters: With Azure Stack, Microsoft already allowed businesses to bring many of Azure’s capabilities into their own data centers. But because it’s basically a local version of Azure, it only worked on a limited set of hardware. Arc doesn’t bring all of the Azure Services, but it gives enterprises a single platform to manage all of their resources across the large clouds and their own data centers. Virtually every major enterprise uses multiple clouds. Managing those environments is hard. So if that’s the case, Microsoft is essentially saying, let’s give them a tool to do so — and keep them in the Azure ecosystem. In many ways, that’s similar to Google’s Anthos, yet with an obvious Microsoft flavor, less reliance on Kubernetes and without the managed services piece. 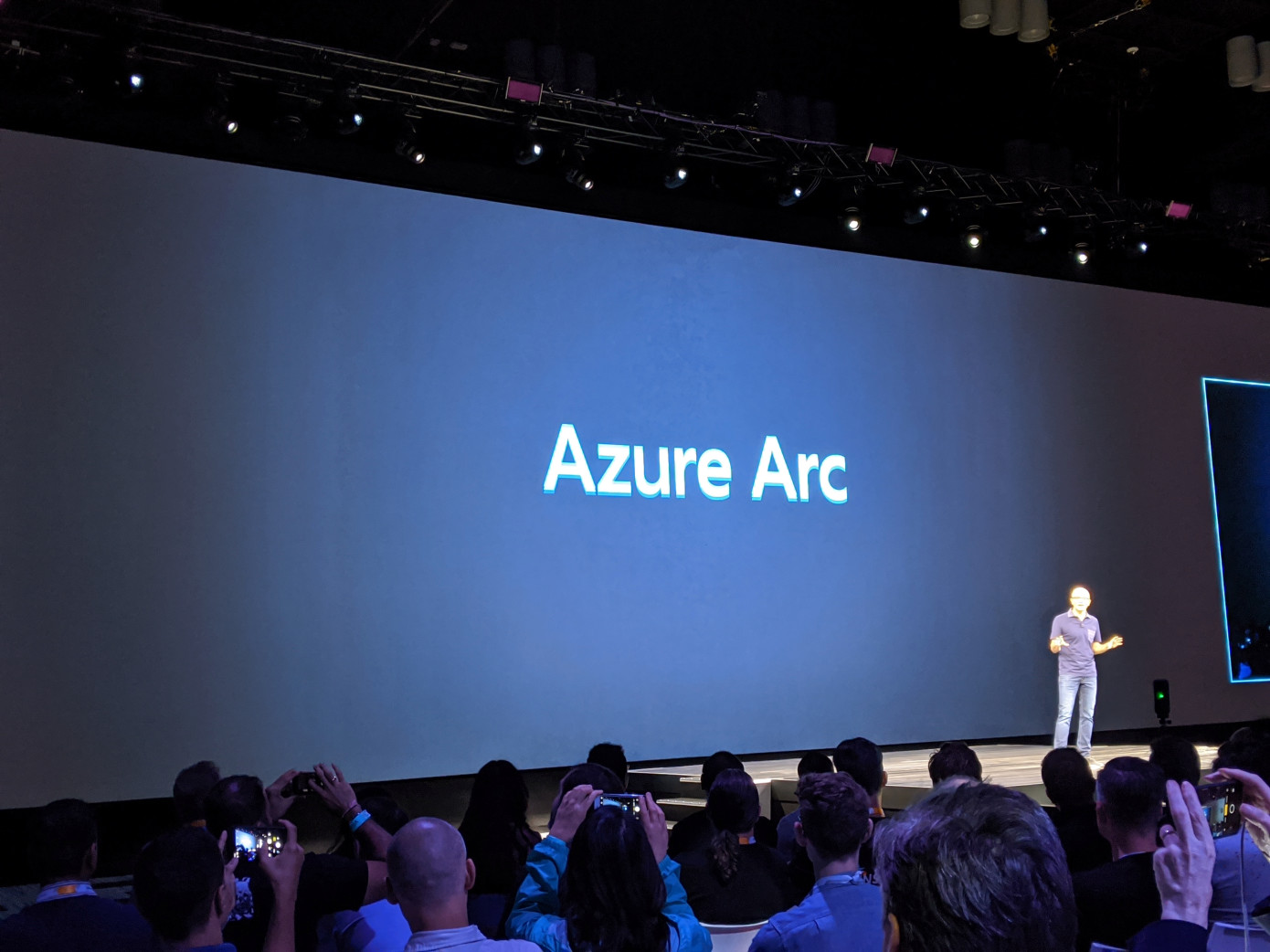 Microsoft launches Project Cortex, a knowledge network for your company

What was announced: Project Cortex creates a knowledge network for your company. It uses machine learning to analyze all of the documents and contracts in your various repositories — including those of third-party partners — and then surfaces them in Microsoft apps like Outlook, Teams and its Office apps when appropriate. It’s the company’s first new commercial service since the launch of Teams.

Why it matters: Enterprises these days generate tons of documents and data, but it’s often spread across numerous repositories and is hard to find. With this new knowledge network, the company aims to surface this information proactively, but it also looks at who the people are who work on them and tries to help you find the subject matter experts when you’re working on a document about a given subject, for example. 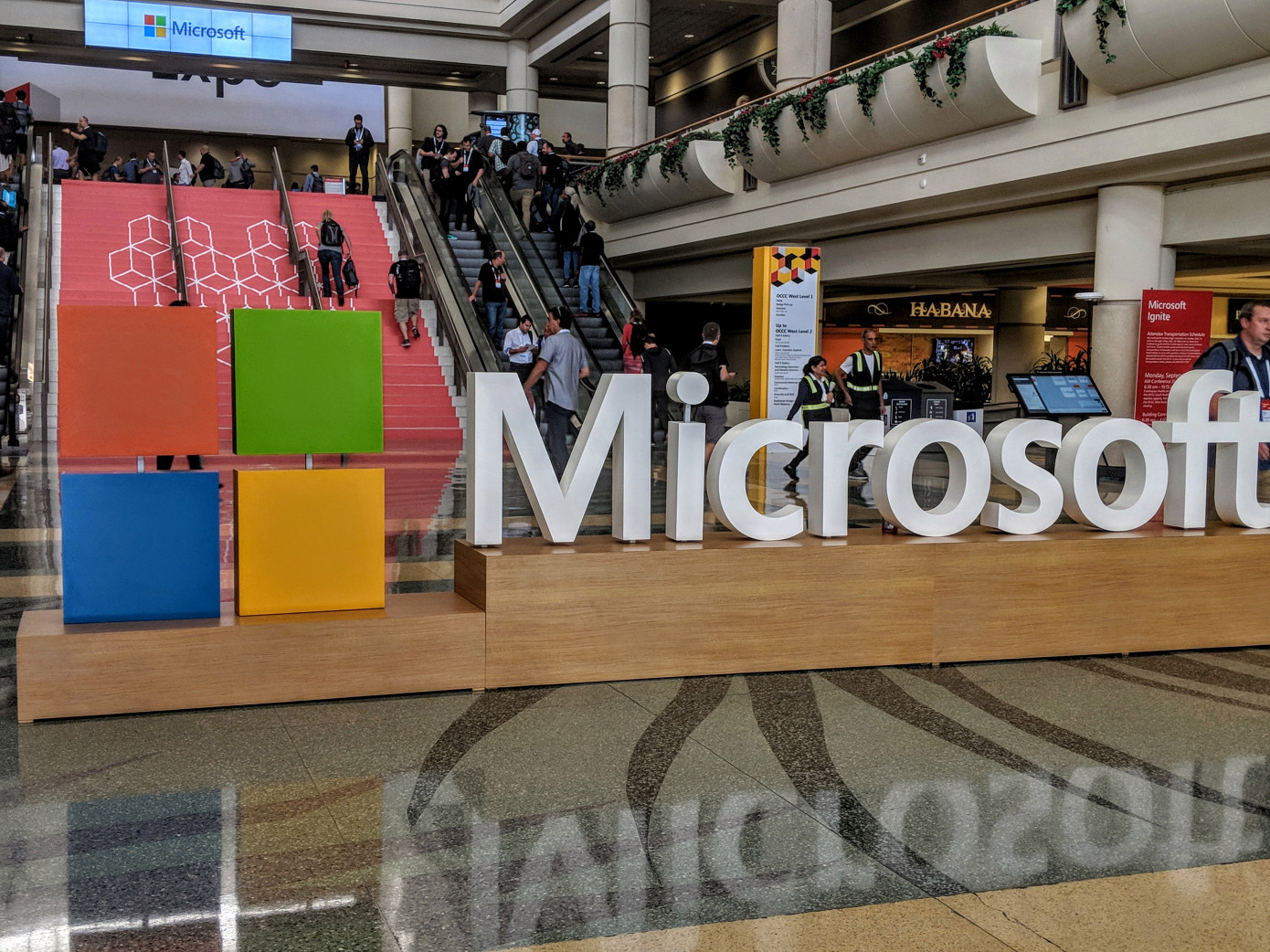 What was announced: Microsoft is combining its ConfigMgr and Intune services that allow enterprises to manage the PCs, laptops, phones and tablets they issue to their employees under the Endpoint Manager brand. With that, it’s also launching a number of tools and recommendations to help companies modernize their deployment strategies. ConfigMgr users will now also get a license to Intune to allow them to move to cloud-based management.

Why it matters: In this world of BYOD, where every employee uses multiple devices, as well as constant attacks against employee machines, effectively managing these devices has become challenging for most IT departments. They often use a mix of different tools (ConfigMgr for PCs, for example, and Intune for cloud-based management of phones). Now, they can get a single view of their deployments with the Endpoint Manager, which Microsoft CEO Satya Nadella described as one of the most important announcements of the event, and ConfigMgr users will get an easy path to move to cloud-based device management thanks to the Intune license they now have access to.

What was announced: Microsoft’s Chromium-based version of Edge will be generally available on January 15. The release candidate is available now. That’s the culmination of a lot of work from the Edge team, and, with today’s release, the company is also adding a number of new privacy features to Edge that, in combination with Bing, offers some capabilities that some of Microsoft’s rivals can’t yet match, thanks to its newly enhanced InPrivate browsing mode.

Why it matters: Browsers are interesting again. After years of focusing on speed, the new focus is now privacy, and that’s giving Microsoft a chance to gain users back from Chrome (though maybe not Firefox). At Ignite, Microsoft also stressed that Edge’s business users will get to benefit from a deep integration with its updated Bing engine, which can now surface business documents, too.

What was announced: At Build earlier this year, Microsoft announced that it would soon launch a web-based version of its Visual Studio development environment, based on the work it did on the free Visual Studio Code editor. This experience, with deep integrations into the Microsoft-owned GitHub, is now live in a preview.

Why it matters: Microsoft has long said that it wants to meet developers where they are. While Visual Studio Online isn’t likely to replace the desktop-based IDE for most developers, it’s an easy way for them to make quick changes to code that lives in GitHub, for example, without having to set up their IDE locally. As long as they have a browser, developers will be able to get their work done. 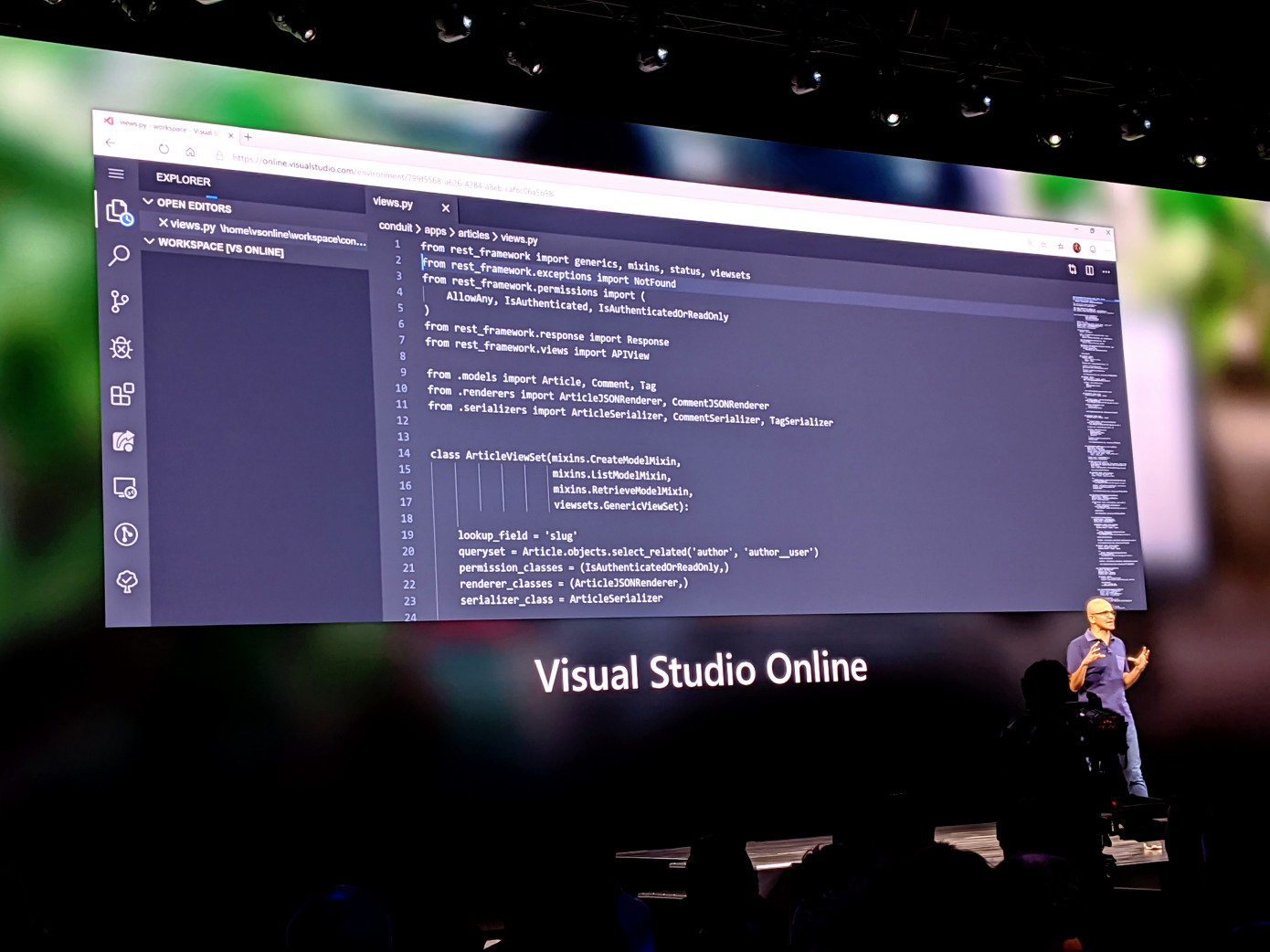 What was announced: Power Virtual Agents is Microsoft’s new no-code/low-code tool for building chatbots. It leverages a lot of Azure’s machine learning smarts to let you create a chatbot with the help of a visual interface. In case you outgrow that and want to get to the actual code, you can always do so, too.

Why it matters: Chatbots aren’t exactly at the top of the hype cycle, but they do have lots of legitimate uses. Microsoft argues that a lot of early efforts were hampered by the fact that the developers were far removed from the user. With a visual too, though, anybody can come in and build a chatbot — and a lot of those builders will have a far better understanding of what their users are looking for than a developer who is far removed from that business group. 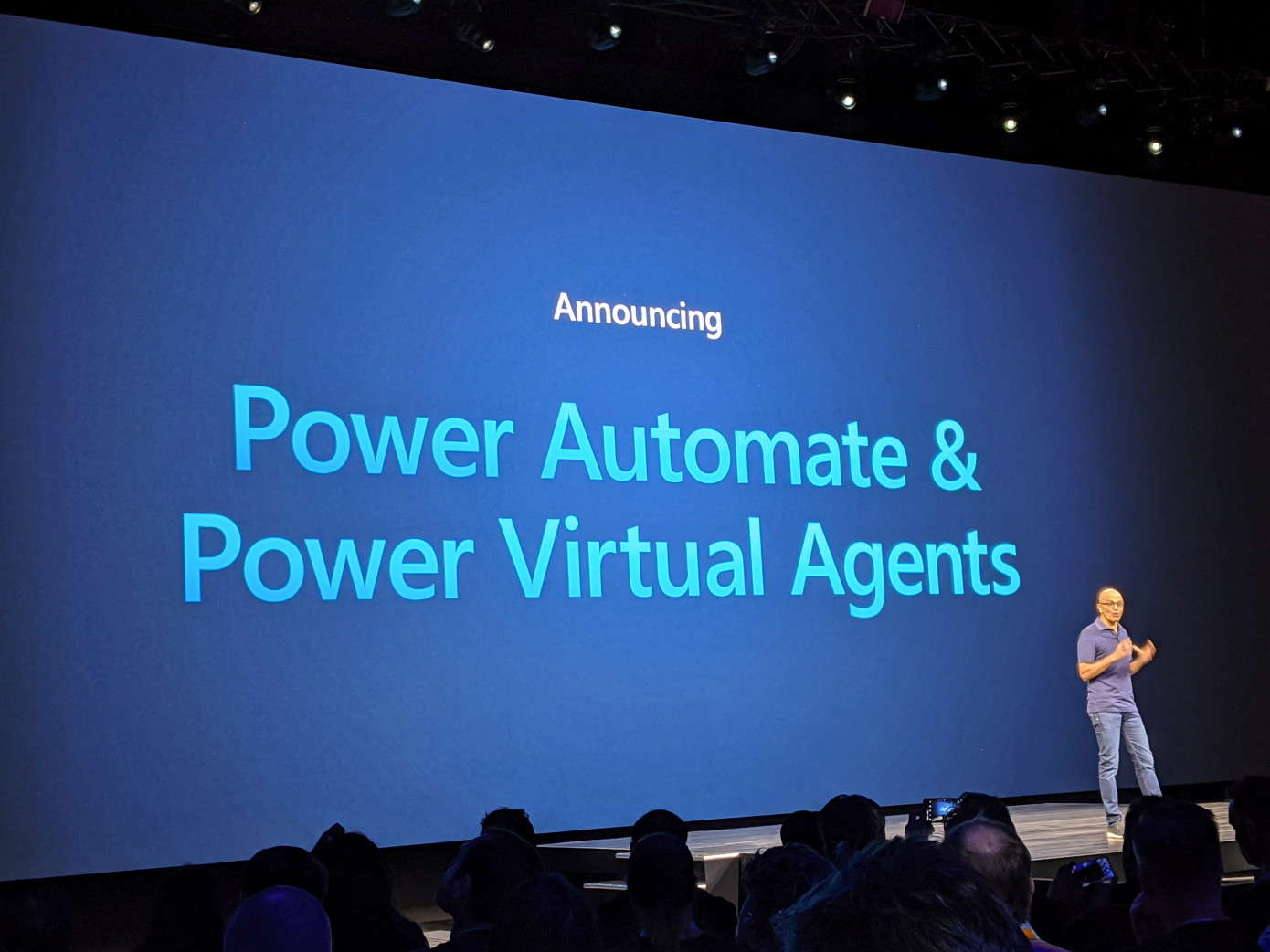 What was announced: Cortana lives — and it now also has a male voice. But more importantly, Microsoft launched a few new focused Cortana-based experiences that show how the company is focusing on its voice assistant as a tool for productivity. In Outlook on iOS (with Android coming later), Cortana can now read you a summary of what’s in your inbox — and you can have a chat with it to flag emails, delete them or dictate answers. Cortana can now also send you a daily summary of your calendar appointments, important emails that need answers and suggest focus time for you to get actual work done that’s not email.

Why it matters: In this world of competing assistants, Microsoft is very much betting on productivity. Cortana didn’t work out as a consumer product, but the company believes there is a large (and lucrative) niche for an assistant that helps you get work done. Because Microsoft doesn’t have a lot of consumer data, but does have lots of data about your work, that’s probably a smart move. 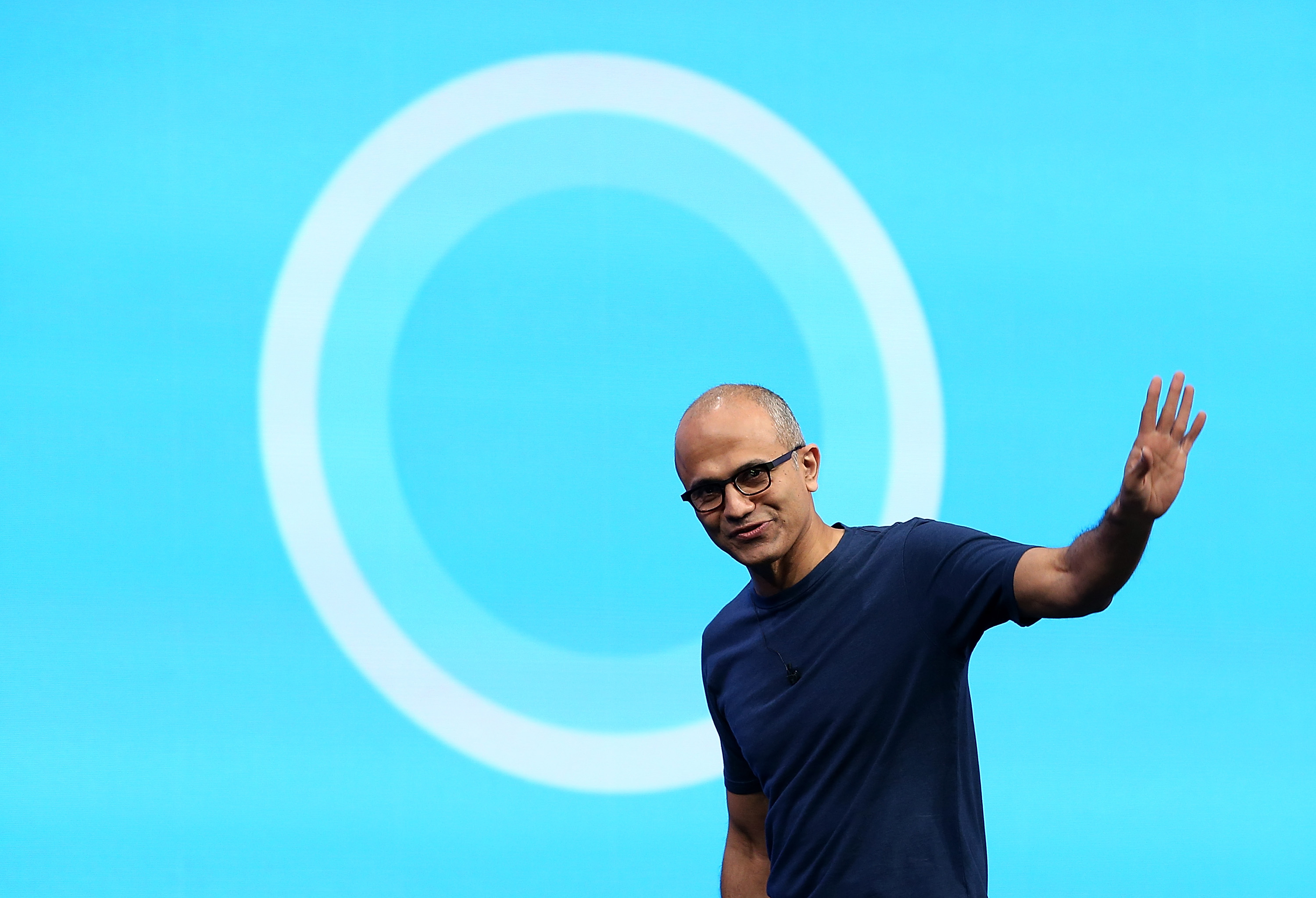 Bonus: Microsoft agrees with you and thinks meetings are broken — and often it’s the broken meeting room that makes meetings even harder. To battle this, the company today launched Managed Meeting Rooms, which for $50 per room/month lets you delegate to Microsoft the monitoring and management of the technical infrastructure of your meeting rooms.

The 7 most important announcements from Microsoft Ignite