Stark raises $1.5M for a toolkit that helps developers and others create more inclusive design

Diversity and inclusion are slowly, slowly moving away from being an afterthought (or worse, a no-thought) in the tech world. And to underscore the new attention the area is getting — in every aspect of the concept — today a startup that’s building tools to help designers and developers make their end products more accessible to people with visual impairments is announcing some funding.

Stark, a New York-based startup that lets designers others building with design software run their files through an integrated tool that checks it and provides color edits and other suggestions to help them meet guidelines for people who see less well, has picked up $1.5 million.

Longer term, the plan is to build and end-to-end platform and to address inclusivity for other kinds of needs beyond visual impairments, and, since accessibility can come in physical forms, too, to consider more than just software, and to create more ways to automatically correct details.

As Cat Noone — the now-European-based CEO who co-founded the company with Michael Fouquet (the team is working remotely, she said) — describes it, the ambition is to “become the Grammarly for accessibility in software.” 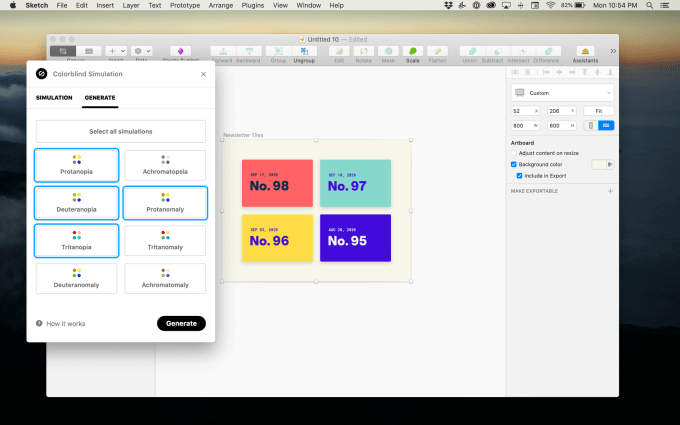 The funding, a pre-seed round, is coming from a wide and interesting group of backers. It was co-led by Daniel Darling and Pascal Unger from Darling Ventures and Indicator Ventures; with participation also from Jason Warner, the CTO of Github; Kleiner Perkins’ Scout Fund; and Basecamp Ventures. Individual backers include the product lead for accessibility at Atlassian, the director of equitable design & impact at Culture Amp, a director of design at DuckDuckGo, a former VP of software development at Oracle, and more.

Part of the reason that Stark has gotten attention from all of these investors is because of its traction.

Early versions of the software have been out for eight months now, in the form of the plugins for Sketch, Adobe XD and Figma, and in that time it’s clocked up 300,000 users, mostly designers, engineers, and product managers across those three design platforms, with current customers including people from Microsoft, Oscar Health, US Bank, Instagram, Pfizer, Volkswagen, Dropbox and more.

It also has 10,000 people in its “community”, which includes people engaging with Stark more directly (rather than just using its plugins), on platforms like Slack, getting its newsletter and more.

Diversity and inclusion have been in the headlines this year, which is good news, even if the reason for it has been not so good — the sorry state of how minorities are treated by law enforcement. Partly because of the profile of those incidents and the subsequent protests, much of the world has associated the concept of D&I very closely with racial inclusion. While that story continues to unfold (and we hopefully continue see more positive and sustained efforts to address it), the kind of diversity and inclusion Stark is addressing is of a different sort.

It’s a logical, if often overlooked area: The Centers for Disease Control and Prevention estimate that (as of 2018) around one in every four adults in the U.S. alone live with some form of disability (a figure that doesn’t count children), with the biggest of these being cognitive disabilities. This essentially means that while a lot of design (and tech in general) is not really built to address this wider group, it’s a very sizable market.

At a time when technology is regularly made out to be the bad guy — and the reasons are many, touching on mental health; physical health; and economic, environmental, civil and legal impacts — designing software and hardware that is more inclusive could go a very long way in bridging some of those gaps that tech has created with (and within) society.

“We’re talking about the largest minority group in the U.S.,” Noone said. “You wouldn’t build a building today without a wheelchair ramp, so why aren’t we accounting for those individuals in our software design?”

Noone said that she and Fouquet originally landed on the idea of Stark when they were doing some work for another firm, building an emergency services app that would get used by the elderly. They built a very early version of the tool for themselves to use in that work. Showing it to others, they found people asking if they could use it, too. “And then it just kind of snowballed,” she said.

She then said that she found herself going down a “rabbit hole into the world of design and accessibility” and realised that not only were there no tools really built to address this out there, but that there was “so much more to the problem than colors.” (Colors was where Stark started, hence the great name.)

There is an interesting stick and carrot in the bigger market with things like inclusive design: for some it might be an issue of having to comply, others simply believe it’s the right thing to do, while yet others may not care but (rather cynically) believe being inclusive is a good look. Whatever the motivation is, the trick with Stark is that it’s making it easy to be inclusive for more people, and lowering the barrier at the end of the day can only be a good thing.

“No software product should exclude a disadvantaged minority of their users. It’s bad for business and bad for society,” said Darling in a statement. “We’re seeing dramatic increasing awareness amongst software designers, developers and executives to ship products that are universally accessible. Stark has quickly earned the trust of the industry and is on a path to become an important part of software infrastructure. We’re thrilled to partner with such a mission driven company that is already improving how software is produced around the world.”​

Stark raises .5M for a toolkit that helps developers and others create more inclusive design