Microsoft several years ago acquired the popular iOS app Wunderlist with the intention of building out its own list-making productivity app that brings the best of Wunderlist’s feature set to a larger group of mobile consumers. This is a similar path as Microsoft took with email app Accompli, which later became Microsft Outlook for mobile devices. In the case of Wunderlist, Microsoft didn’t just rebrand the app — it built a new one called Microsoft To Do. With Wunderlist up and running for years alongside To Do, its founder wants to know if he can just have it back.

The founder of Wunderlist maker 6 Wunderkinder, Christian Reber, recently tweeted a desire to buy his app back from Microsoft just as the company is launching a new version of To Do.

According to the tweets, Reber says he’s serious about reacquiring Wunderlist and wants to make it open-source and free. He even tweeted a list of upgrades he’d like to build, including features like shared folders and cross-team collaboration, among other things.

Still sad @Microsoft wants to shut down @Wunderlist, even though people still love and use it. I’m serious @satyanadella @marcusash, please let me buy it back. Keep the team and focus on @MicrosoftToDo, and no one will be angry for not shutting down @Wunderlist. pic.twitter.com/27mIABncLF

What I would do with @Wunderlist if I would get it back: pic.twitter.com/DYslu8mhOp

The founder doesn’t come across as having sour grapes exactly. He just says he’s sad that his plans for Wunderlist didn’t work out, but he’s grateful for the Microsoft exit.

If anything, it seems to be just remorse over the fact that Wunderlist itself will be shut down.

Want to make one thing clear: I feel nothing but gratitude for @Microsoft and everyone involved in the @Wunderlist acquisition in 2015. It made perfect sense, definitely the best thing that ever happened to us. The team there is amazing, I’m friends with many of them. 1/2

Microsoft had said years ago this was its intention, but also that it would hold off until it felt it has a competitive product that Wunderlist’s users would love.

On Monday, Microsoft unveiled another upgrade for Microsoft To Do, which hints that the Wunderlist shut down could be nearing.

The upgrade delivers a more polished look-and-feel with a wider range of backgrounds, including the Berlin TV tower theme that was popular in Wunderlist. 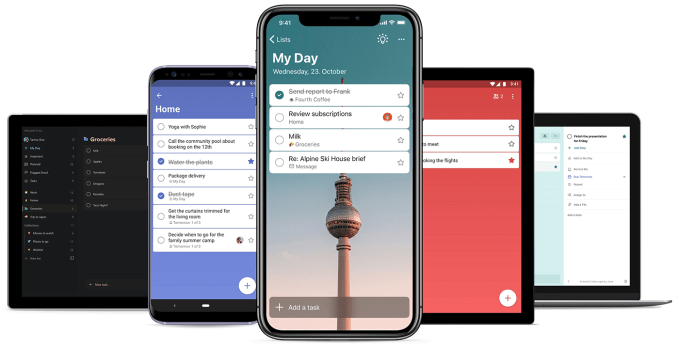 The app also includes smart lists and a personalized daily planner that offers smart suggestions of tasks that need to be accomplished, Microsoft reminded its users, and it’s supported across a variety of platforms including iOS, Android, Windows, and Mac.

The app is now also integrated with other Microsoft apps like Outlook, Microsoft Planner, Cortana, and Microsoft Launcher on Android, among others. And it works with Alexa, if you prefer.

With the release, Microsoft is again pushing users to migrate from Wunderlist to To Do to gain access to these features.

It did not, however, give an end-of-life date for Wunderlist, which is remarkably still a top 100 Productivity app in the U.S. App Store, according to data from App Annie, over four years after its acquisition.

We’ve asked Microsoft if it will share more details around its plans for Wunderlist and if it has any response to Reber’s request. We’ll update if the company comments.

As for Reber, he says he’s written to Microsoft many times before and now tried to make it more official via Twitter. He says the offer is, indeed, serious and the price would be based on the negotiation. “Chances are low, but I’m trying,” he said.