Microsoft is following Apple and Google’s lead with today’s launch of per-app and per-game time limits in its parental control software. Already, the company allows parents to limit screen time across Windows 10, Xbox One, and Android via the Microsoft Launcher. However, it hadn’t yet allowed parents to limit the amount of time a child would spend in a specific app or game, as its competitors do.

Instead, its existing controls allowed parents only to dole out a set amount of hours of screen time. Parents could choose to either leave the time up to the kids to manage, or limit it at the device level — like, only allowing one hour of Xbox time but permitting more screen time on the PC, for example.

However, the current trend in screen time management is not to approach all screen time as unproductive and unhealthy. Instead, it’s about configuring limits on the more addictive apps and games that eat up increasing amounts of children’s time, while permitting educational tools to have fewer limits.

For older kids and teens, social media apps like TikTok or Instagram could be the culprit, while younger kids may just be spending too much time “hanging out” in virtual worlds like Roblox and Fortnite. Problems on this front have gotten pretty bad. Mobile games are under fire for using gambling tactics like loot boxes to engage children. And Fortnite is now the subject of a lawsuit that claims that, in part, that the game’s addictive nature is due to its use slot machine-like mechanics and variable reward systems, which manipulate children’s brains.

Without being able to limit these apps directly, kids may end up using all of their allotted screen time on just the one app or game they’re obsessed with at the moment.

Apple had already allowed per-app time limits with the launch of its screen time controls in iOS 12. And Google more recently updated its own Family Link software, now preinstalled on new Android devices, to include a similar feature.

With today’s update, Microsoft is now on board, too. 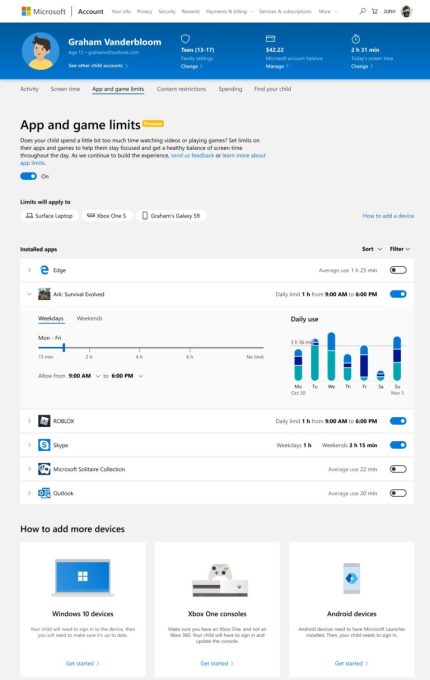 The controls also allow parents to offer more screen time on certain days — like weekends, for instance — than others.

To use this feature, parents will need to create a family group and make Microsoft accounts for all the kids.

Once enabled, kids will get a warning about their screen time 15 minutes before the limit is reached, and then again at 5 minutes. Since kids will often beg for a few more minutes, Microsoft made it easy for parents to grant or deny more time via email or via a Microsoft Launcher notification on their own Android phone.

“Ultimately, our goal is for the app and game limits feature to provide flexible and customizable tools to meet each family’s unique needs,” the company explains in an announcement. “You as parents know what’s best for your children — no technology can ever replace that — but we’re hoping these tools can help you to strike the right balance,” it says.