Human Capital: Uber engineer explains why he spoke out against Prop 22

Welcome back to Human Capital where we discuss the latest in labor, and diversity and inclusion in tech.

This week’s eyebrow-raising moment came Wednesday when the U.S. Department of Labor essentially accused Microsoft of reverse racism (not a real thing) for committing to hire more Black people at its predominantly white company.

And that wasn’t even the most notable news items of the week. Instead that award goes to Uber engineer Kurt Nelson and his decision to speak out against his employer and urge folks to vote no on the Uber-sponsored ballot measure in California that aims to keep drivers classified as independent contractors. I caught up with Nelson to hear more about what brought him to the point of speaking out. You can read what he had to say further down in this newsletter.

But first, I have some of my own news to share —  Human Capital is launching in newsletter form on Friday, Oct. 23. Sign up here so you don’t miss out.

Remember how Coinbase provided an out to employees who no longer wanted to work at the cryptocurrency company as a result of its stance on social issues? Well, Coinbase CEO Brian Armstrong said this week that about 5% of employees (60 people) have decided to take the exit package, but that there will likely be more since “a handful of other conversations” are still happening.

Armstrong noted how some people worried his stance would push out people of color and other underrepresented minorities. But in his blog post, Armstrong said those folks “have not taken the exit package in numbers disproportionate to the overall population.”

Microsoft disclosed this week that the U.S Department of Labor Office of Federal Contract Compliance Programs regarding its racial justice and diversity commitments made in June. Microsoft had committed to double the number of Black people managers, senior individual contributors and senior leaders in its U.S. workforce by 2025. Now, however, the OFCCP says that could be considered as unlawful discrimination in violation of Title VII of the Civil Rights Act. That’s because, according to the letter, Microsoft’s commitment “appears to imply that employment action may be taken based on race.”

“We are clear that the law prohibits us from discriminating on the basis of race,” Microsoft wrote in a blog post. “We also have affirmative obligations as a company that serves the federal government to continue to increase the diversity of our workforce, and we take those obligations very seriously. We have decades of experience and know full well how to appropriately create opportunities for people without taking away opportunities from others. Furthermore, we know that we need to focus on creating more opportunity, including through specific programs designed to cast a wide net for talent for whom we can provide careers with Microsoft.”

This comes shortly after the Trump administration expanded its ban on diversity and anti-racism training to include federal contractors. While this does not fall into the scope of that ban, it’s alarming to see the DOL going after tech company for trying to increase diversity. However, it does seem that the effects of the ban are making its way into the tech industry.

Joelle Emerson, founder and CEO of diversity training service Paradigm, says she lost her first client as a result of the executive order. While it’s not clear which client it was, many of Paradigm’s clients are tech companies.

We just lost our first client as a result of the executive order on diversity training. I'm sure it won't be our last. Seems it's having exactly its intended impact. I wish I could say I feel proud to be on the right side of history, but I just feel scared.

It’s widely understood that Black and Latinx founders receive not nearly as much funding as their white counterparts. Now, Crunchbase has shed some additional light on the situation. Here are some highlights from its 2020 Diversity Spotlight report. 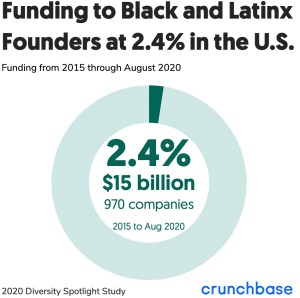 Going against his employer, Uber engineer Kurt Nelson penned an op-ed on TechCrunch about why he’s voting against Prop 22. Prop 22 is a ballot measure in California that seeks to keep rideshare drivers and delivery workers classified as independent contractors. I caught up with Nelson after he published his op-ed to learn more about what brought him to the point of speaking out against Prop 22.

“It was a combination of COVID affecting unemployment and health insurance for a bunch of people, getting close to the election and not having seen anyone who is really former Uber or Uber or former any gig companies saying anything,” Nelson told me.

Plus, Nelson is on his way out from Uber — something that he’s been forthcoming about with his manager. He had already been feeling frustrated about the way Uber handled its rounds of layoffs this year, but the company’s push for Prop 22 was “the final nail in the coffin.”

Uber’s big arguments around why drivers should remain independent contractors is that it’s what drivers want and that it’d be costly to make them employees. Uber has said it also doesn’t see a way to offer flexibility to drivers while also employing them.

“I think it’d be really challenging,” Uber Director of Policy, Cities and Transportation Shin-pei Tsay told me at TC Sessions: Mobility this week. “We would have to start to ensure that there’s coverage to ensure that there’s the necessary number of drivers to meet demand. That would be this forecasting that needs to happen. We would only be able to offer a certain number of jobs to meet that demand because people will be working in set amounts of time. I think there would be quite fewer work opportunities, especially the ones that people really have said that they like.”

But, as Nelson notes, Silicon Valley prides itself on tackling difficult problems.

“We’re a tech company and we solve hard problems — that’s what we do,” he said.

During all-hands meetings, Nelson described how the executive team wears Yes on 22 shirts or has a Yes on 22 Zoom background. Uber has also offered employees free Yes on 22 car decals and shirts, Nelson said.

Kickstarter settles with NLRB over firing of union organizer

Kickstarter agreed to pay $36,598.63 in backpay to Taylor Moore, a former Kickstarter employee who was fired last year, Vice reported. Moore was active in organizing the company’s union, which was officially recognized earlier this year. As part of the settlement with the National Labor Relations Board, Kickstarter also agreed to post a notice to employees about the settlement on its intranet and at its physical office whenever they reopen.

In September 2019, Kickstarter fired two people who were actively organizing a union. About a year later, the Labor Board found merit that Kickstarter unlawfully fired a union organizer.

It’s been about a year since 80 Google contractors voted to form a union with US Steelworkers. But those contractors, who are officially employed by HCL America, have not been able to engage in collective bargaining, according to a new complaint from the National Labor Relations Board, obtained by Vice.

The complaint states HCL has failed to bargain with the union and has even transferred the work of members of the bargaining unit to non-union members based in Poland. The NLRB alleges HCL has done that “because employees formed, joined and assisted the Union and engaged in concerted activities, and to discourage employees from engaging in these activities.”

Human Capital: Uber engineer explains why he spoke out against Prop 22