AWS took a hard blow last year when it lost the $10 billion, decade-long JEDI cloud contract to rival Microsoft. Yet even without that mega deal for building out the nation’s Joint Enterprise Defense Infrastructure, the company remains fully in control of the cloud infrastructure market — and it intends to fight that decision.

In fact, AWS still owns almost twice as much cloud infrastructure market share as Microsoft, its closest rival. While the two will battle over the next decade for big contracts like JEDI, for now, AWS doesn’t have much to worry about.

There was a lot more to AWS’s year than simply losing JEDI. Per usual, the news came out with a flurry of announcements and enhancements to its vast product set. Among the more interesting moves was a shift to the edge, the fact the company is getting more serious about the chip business and a big dose of machine learning product announcements.

The fact is that AWS has such market momentum now, it’s a legitimate question to ask if anyone, even Microsoft, can catch up. The market is continuing to expand though, and the next battle is for that remaining market share. AWS CEO Andy Jassy spent more time than in the past trashing Microsoft at 2019’s re:Invent customer conference in December, imploring customers to move to the cloud faster and showing that his company is preparing for a battle with its rivals in the years ahead.

AWS remains in firm control of the cloud infrastructure market

AWS closed 2019 on a $36 billion run rate, growing from $7.43 billion in in its first report in January to $9 billion in earnings for its most recent earnings report in October. Believe it or not, according to CNBC, that number failed to meet analysts expectations of $9.1 billion, but still accounted for 13% of Amazon’s revenue in the quarter.

Regardless, AWS is a juggernaut, which is fairly amazing when you consider that it started as a side project for Amazon .com in 2006. In fact, if AWS were a stand-alone company, it would be a substantial business. While growth slowed a bit last year, that’s inevitable when you get as large as AWS, says John Dinsdale, VP, chief analyst and general manager at Synergy Research, a firm that follows all aspects of the cloud market.

Dinsdale added, “To put that into context, this growth in quarterly revenue is bigger than Google’s total revenues in cloud infrastructure services. In a very large market that is growing at over 35% per year, AWS market share is holding steady.”

Dinsdale says the cloud infrastructure market didn’t quite break $100 billion last year, but even without full Q4 results, his firm’s models project a total of around $95 billion, up 37% over 2018. AWS has more than a third of that. Microsoft is way back at around 17% with Google in third with around 8 or 9%. 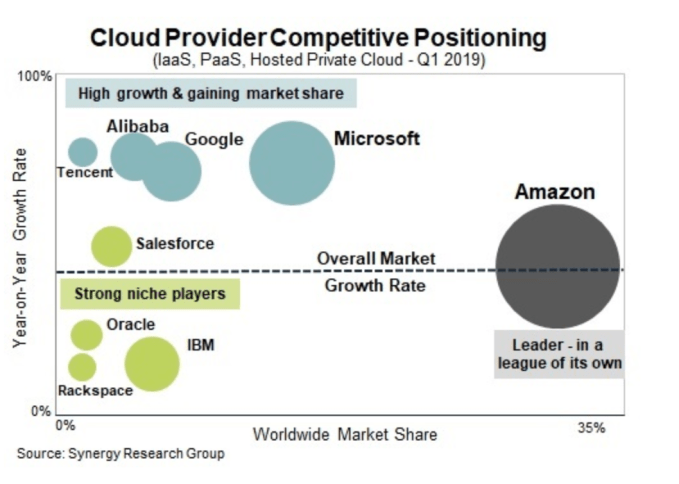 While this is from Q1, it illustrates the relative positions of companies in the cloud market. Chart: Synergy Research

It would be hard to do any year-end review of AWS without discussing JEDI. From the moment the Department of Defense announced its decade-long, $10 billion cloud RFP, it has been one big controversy after another.