America’s largest companies are not covered under a bill passed by the House of Representatives on Friday that is supposed to support American workers impacted by the spread of the novel coronavirus.

The bill still has to be voted on by the Senate and approved before it can be signed into law, but its structure leaves a gaping hole in the prevention strategy the government has said is necessary to reduce the COVID-19 outbreak in the US.

“No American worker should worry about missing a paycheck if they’re feeling ill,” said Vice President Mike Pence at the Sunday press briefing from the Coronavirus Task Force. “If you’re sick with a respiratory illness stay home.”

However, millions of Americans potentially don’t have the ability to make that choice under the congressional aid package touted by both Democrats and Republicans. By excluding companies with more than 500 employees from the Congressional aid, the health and welfare of millions of Americans in industries providing goods, manufacturing, and vital services to most of the country is being left up to the discretion of their employers. 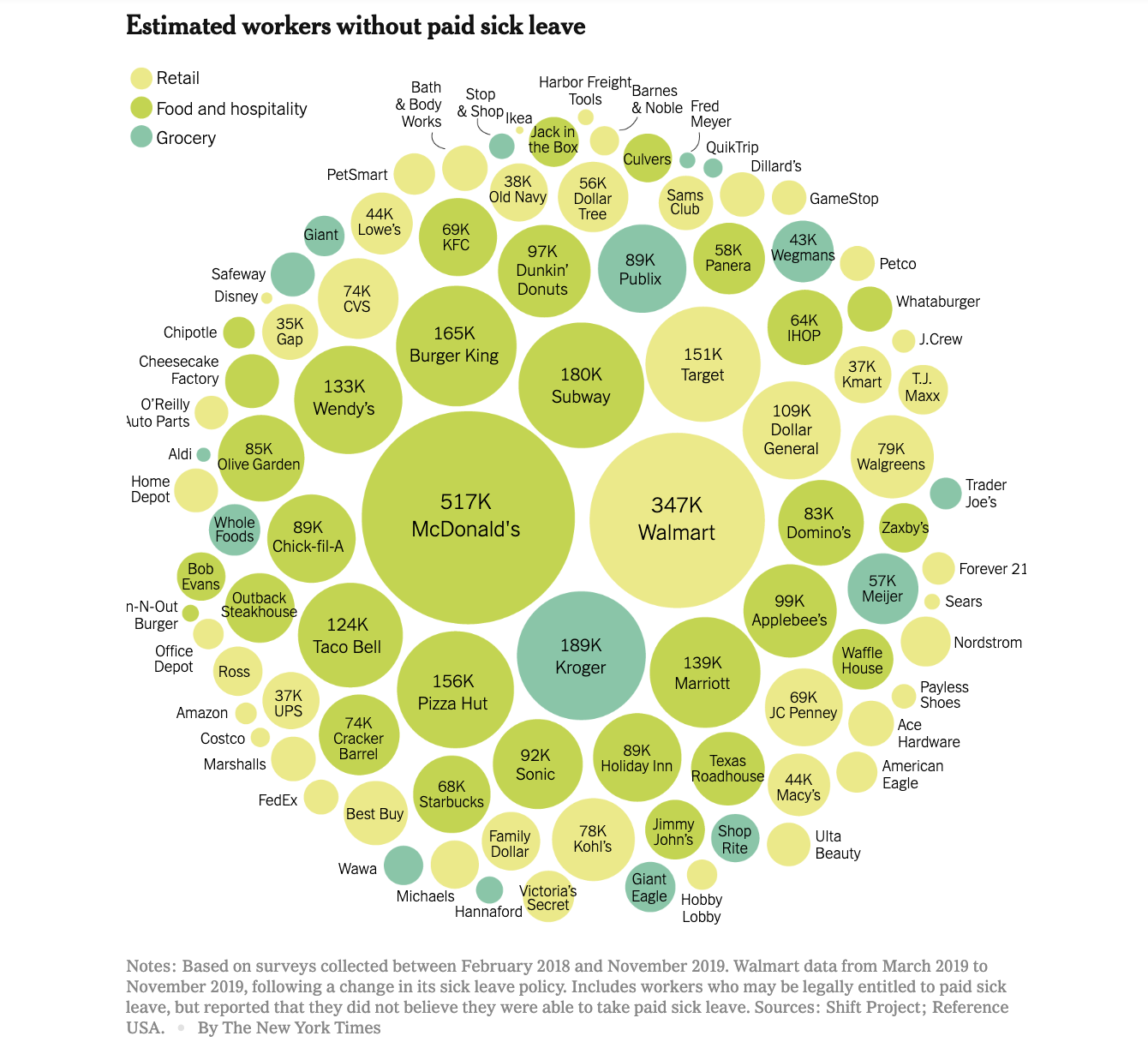 As part of a brokered agreement between House Democrats and the White House, a bid to include guaranteed paid time off or sick leave for every U.S. worker affected by the coronavirus outbreak was rejected. Instead, these protections were replaced with tax breaks, which would be distributed to most small and medium-sized businesses to cover the costs of paying employees during business shutdowns or health care emergencies brought on by the novel coronavirus.

Big technology companies took the lead early this month in changing policies for their workers and by the end of last week many of the country’s largest employers had followed suit. But it looks like their work won’t be covered under the government’s current plan — and that any measures to extend sick leave and paid time off will be limited to a response to the current outbreak.

These large employers have already responded by closing stores or reducing hours in areas where most cases of the novel coronavirus have been diagnosed — and companies operating in most of those states are required by law to offer paid leave to their hourly employees and contractors.

Companies who have responded to the outbreak by changing their time-off and sick leave policies include Walmart, Target, Darden Restaurants (the owner of the Olive Garden restaurant chain), Starbucks, Lowes, and KFC, have joined tech companies and gig economy businesses like Alphabet (the parent company of Google), Amazon, Apple, Facebook, Instacart, Microsoft, Postmates, Salesforce, and Uber in offering extended leave benefits to employees affected by the coronavirus.

These kinds of guarantees can go a long way to ensuring that hourly workers in the country don’t have to choose between their health and their employment. The inability to pass a law that would cover all workers puts everyone at risk.

Without government stepping in, industries are crafting their own responses. Late Sunday, automakers including GM, Ford, and FiatChrysler joined the United Auto Workers union in announcing the creation of a coronavirus task force to coordinate an industrywide response for the automotive sector.

As the Pew Research Center noted last week, the bill proposed by House Democrats had initially proposed temporary federal sick leave covering workers with COVID-19 or caring for family members with two-thirds of their wages for up to three months; expiring in January 2021. The measure would have also guaranteed private employers give workers seven days of paid sick leave with another 14 days available immediately in the event of future public health emergencies.